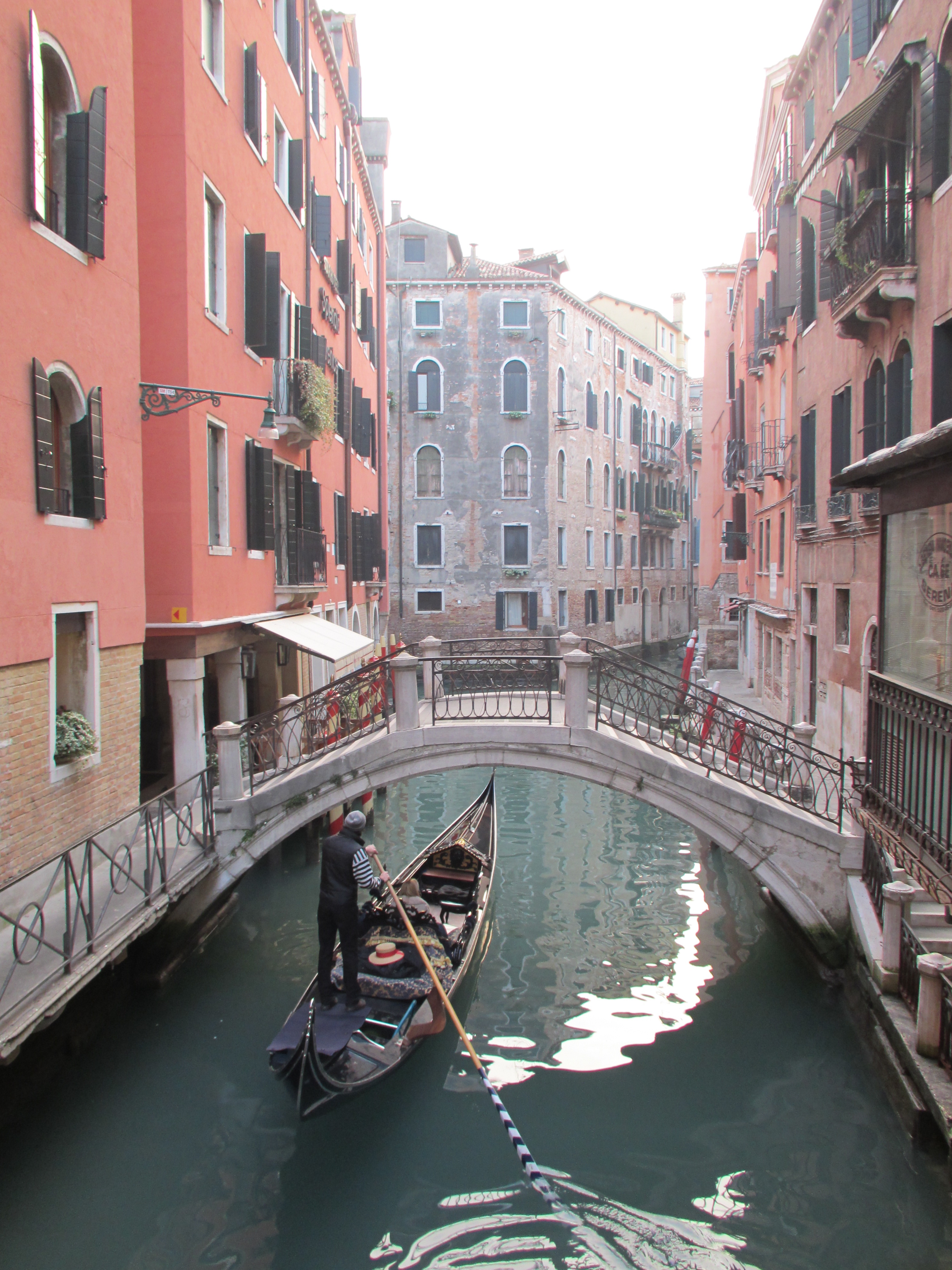 Frankly, I wasn’t planning to love Venice. I went there with low expectations thinking I would want to see it for the sole purpose of checking it off my bucket list. Well I couldn’t have been more wrong.  It took my breath away–literally–the second I stepped outside of the train station and saw the bustling Grand Canal in all its glory, snaking its way around bends in either direction as it flowed alongside the colorful buildings and wooden docks that line its edges.

Venice enchants you.  Its color palette is similar to Rome in that it’s mostly warm, but Venice features a wider array of shades in the pink family while Rome’s tends to lean more towards the orange/peach side of the spectrum. (There are of course pink and other-colored buildings to be found in Rome and vice versa.)  The vibrant colors and diverse architecture–some Gothic, some Byzantine, among other styles–are off-set by the blue-green-hued, velvety canal water….you can’t see what lies beneath. The narrower waterways are smooth & silent, like a solid sheet of ice. You don’t hear the water flowing unless a boat or gondola glides through and disrupts the stillness of the shiny surface with ripples which soon disappear as the water irons itself out to settle back in to it’s pre-disrupted solid stance.  The larger, wider canals, such as the Grand Canal itself, have more of a defined current and you can hear the water splashing as the canal flows. Tiny bridge after tiny bridge–with an occasional large ponte thrown into the mix–connects tiny canal to not-so-tiny canal to tinier canal and so forth. While I haven’t travelled all over the world (yet!)–I think it’s safe to say there’s no place quite like Venice.  Sure I had heard all about Venice before visiting, had seen countless pictures and watched The Tourist, but nothing prepares you for seeing the city for the first time.

Venice is really something else.  There are no cars…people come and go by train, gondola, private boat, vaporetto or on foot. Some palazzi have little arched, water-side entranceways where people can easily park and tie up their boat, then enter. At night, there are no engines, exhaust fumes or anything aggressively invasive that could pose  a possible threat to a peaceful slumber. Save for some light footsteps, mumblings of conversations and an occasional canal splash,  Venice sleeps (or at least appears to) at the same time as its inhabitants.

It’s too hot and crazy to head there now as its walkways and bridges are most likely stuffed to the brim with slow-striding people rocking mullets and sporting fanny packs. It’s a special place and I’d like to enjoy it with as few crowds as humanly possible. I’m hoping to get back there for a long weekend  during the late fall and in addition to further exploring this mesmerizing, story-book-like city of inter-connected islands, I do hope to get to the isola of Burano to see the lace. Yes, I’d like to go to Murano too, but if I’m only going to see one island, Burano it is…I love me some lace.