If you’re a movie buff, you’re likely to come to Milan and visit Villa Necchi Campiglio if only to walk in Tilda Swinton’s footsteps from Luca Guadagnino’s 2009 film I Am Love (Io Sono L’amore).

Villa Necchi Campiglio is the house museum that shines as the Recchi family home in the film, and my first time in Milan, I just had to go there.  The house, which boasts a spectacular simplicity, is so perfectly showcased that it’s a character in the film in and of itself.

So, Villa Necchi Campiglio is a house museum in Milan, part of a network of one time residences that display artwork and touches from their original fine owners, and are now open to the public. This particular 1930s mansion was designed in the rationalist style by renowned architect Piero Portaluppi, and is located in a verdant plot of land on Via Mozart complete with a tennis court and a pool, the latter of which you’ll immediately recognize from the film’s tragic climax scene. 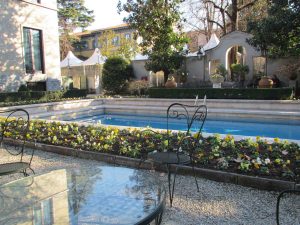 The house belonged to sisters Nedda and Gigina Necchi, heiresses of a sewing machine company, as well as the latter’s husband Antonio Campiglio. Their home is completely intact and offers amazing insight into their lives as prominent members of Milanese High Society.

You can’t roam on your own, which is understandable. Guided visits in Italian take place every 30-45 minutes and last about an hour. If you contact the museum in advance, you might be able to schedule a tour in your mother tongue.  The first time I was there tours were Italian only, but there are a few English tours per day. You might want to call them (or ask your concierge to call them) in advance to confirm the time. 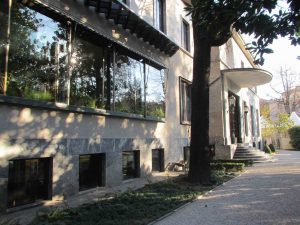 During the tour, you’ll see the iconic dining room where one of the movie’s first scenes takes place, as Tilda Swinton was sorting out the seating arrangements.  The Art Deco interior contains objects designed by the architect are found throughout as well as furniture and upholstery by Tomaso Buzzi.  There’s a stunning marble bathroom, the grand walnut staircase on which you can practically see the ghosts of high society; sun beds and even electronic bind shutters which were a true luxury at the time. What’s so profound was not only how detail oriented Peitro Portaluppi was, but also how forward thinking all of his ideas were.

Nedda’s  collection of twentieth century art includes works by  Jean Arp, Gianni Dova, Lucio Fontana, Roberto Crippa, Mario Sironi, and René Magritte among others, and in addition, works from two other collections call the museum home: a series of eighteenth century design pieces on the second floor that belonged to Alighiero and Emilietta de’ Micheli and early-to-mid-twentieth-century paintings and sculptures found throughout the ground floor that belonged to Claudia Gian Ferrari that includes pieces by Morandi and Di Chirico.

You’ll see the servants quarters once you leave, of which there is something very Downton Abbey-esque.  Following the tour,  roam the gardens at your own pace and have a bite or a drink in the café.