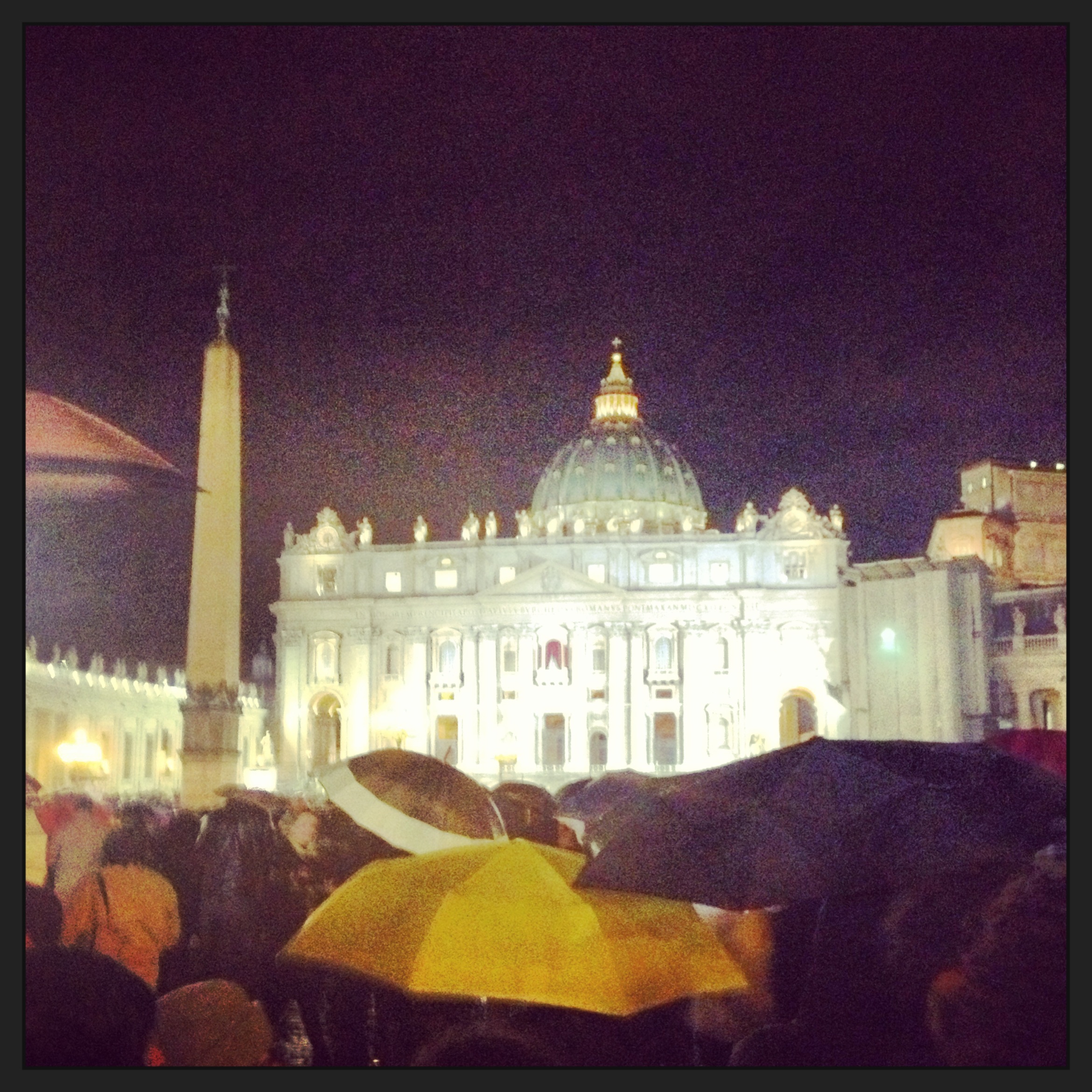 So, I realize this op-ed by Frank Bruni ran in The New York Times on St. Patrick’s Day and is therefore now considered “old news,” but I feel compelled to mention it now.

I learned about Benedict’s resignation a few days after my arrival here–I was actually in Milan for Identita Golose–and my inner Catholic School girl was tickled pink to learn that there would be a conclave during my time here. Between this and the forthcoming election–though I’m still not completely sure I understand what exactly happened with the latter–it was definitely a remarkable time to be in Italy.

Conclave, day one: watched RAI as I couldn’t bring myself to stand in the torrential downpour.

Conclave, day two: taught an evening English lesson and checked Twitter immediately after. No news. As soon as my tram pulled into Flaminio, I checked Twitter again to find my feed rampant with white smoke Tweets. I hopped on the metro and got off  two stops later at Via Ottaviano to walk alongside hundreds–if not thousands–of others to St. Peter’s Square. With the exception of a few umbrella tiffs, there was an uplifting spirit and an aura of excitement among the crowd while we waited. (Note: at this point the umbrellas were unnecessary because the rain had stopped, but some clueless people still felt the need to keep them open while some ballsy others had no qualms about asking the clueless to close them, hence the aforementioned tiffs.)

The entire experience was beautifully majestic.  News outlets from all over the world were present and for many, witnessing the Habemus Papam announcement–or anything of that capacity–is once-in-a-lifetime (though I hope that, God willing, I am alive and well, and still residing in Rome for the next conclave). I really didn’t follow the contenders as closely as I should have but I was hoping for Sc0la because of my fondness for Milan and all things Milanese.  (This was prior to me being made privy to his Mafia connections.)

Now back to the Op-Ed: When Francis emerged, I’m sure I wasn’t the only person in the crowd whose feelings mirrored what Frank Bruni ever so eloquently captures.  I do believe I’m one of those distant Catholics who doesn’t want  to give up on the “compass” of faith. Faith is, in a sense, more than a religion. It’s a tradition that at many times is an integral part of one’s heritage, and it can be really difficult–for me at least–to completely turn my back on something that’s been in my family and was part of my upbringing and education, no matter how frustrated I am. Here’s to hoping that positive changes are afoot with Francesco. I, too, am curious to see if he’s able to get some of us back.