They say old habits die hard, but when I moved to Italy, an old habit died of mine quite easily: Dinner by delivery. I was forced to start cooking, and I was happy to because I had way more control of my time as a freelancer, so cooking didn’t feel like a “necessity”. Also, I couldn’t order delivery even if I had wanted to because it just wasn’t a thing here. If I wanted to eat at home, I had to cook.

However, the times they have been a-changin’ here in Milan thanks to a handful of food delivery apps that have launched over the last year or so. However, I had become so accustomed to cooking or grabbing an occasional meal to go that I never gave delivery a second thought. …until last Saturday.

My yoga class had finished at around 1.45 pm, and I had been dreaming of a spicy tuna roll and vegan sushi bowl from Macha Café accompanied by a fresh spremuta made with fennel, celery, apple and mint to wash it all down to wash it all down. However, Macha Café’s line was just way too long. All the people freaked me out a bit, so I tried to call in an order for pick-up, but they couldn’t hear me. (My phone is having issues and an upgrade is in order when I’m in the U.S. for Christmas. Anyway, I digress.) Even though I probably could have cut the line for a to-go order, I was just way too intimated by the crowd and couldn’t bring myself to reapproach the line. Then I saw a Deliveroo bike outside and said, wait a sec! A quick google check confirmed that yes, indeed, I could order Macha Café via delivery. 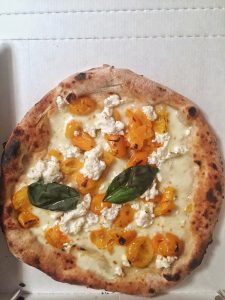 So, I went home, downloaded Deliveroo, and had Macha Café’s menu at my fingertips! Even better, my order was at my door in 30 minutes, and the spremuta was still cold! But it didn’t end there…I ordered in from Lievità, one of my favorite pizzerias, on Wednesday night. I was just too tired to cook and I had such a craving for good pizza. Plus, I hadn’t tried Lievità’s pizza with the yellow tomatoes yet and it was high time I did.

In addition to Deliveroo, similar apps include Foodora, JustEat.it, and UberEats. I’ve only used Deliveroo, and it’s super efficient and organized…so much, in fact, that I fear my new cooking habit might just die just as easily as it started. Boh!

0 replies on “Deliveroo: To cook or not to cook?”