There’s a common belief that all made-in-Italy balsamic vinegar is that fancy concoction that the late Anthony Bourdain highlighted on his show.  That’s not 100% true—more on that here. However, Acetaia Giusti, Italy’s–and the world’s–oldest acetaia, makes that storied elixir quite alchemically.

Having been established in central Modena in 1605, Acetaia Giusti just moved its headquarters to a restored 19th-century borgo outside the city center. Current CEO Claudio Stefani Giusti (the 17th generation) showed us around the new digs, which comprise a curious museum and a divinely aromatic aging room.  Yes, it’s open to the public so you should book a visit  for a tour and tasting.

The two-floor museum highlights the entire balsamic-vinegar-making process from grape to bottle and recounts the acetaia’s impressive history. A particular highlight is the life and times of Giuseppe Giusti, a trailblazer who–literally–put his family’s acetaia on the map during the 19th-century. Equipped with several balsamics,  Giusti traveled the continent to attend world and national expos around Europe, including fairs in Florence, Paris and Vienna, where he received dozens of medals for the excellence of his products. In fact, he even received a certificate representing the stamp of approval from Italy’s king himself: Vittorio Emanuele II.

A gloriously pungent yeast-like aroma wafted through the acetaia’s aging room, which was filled with black wooden barrels of different sizes. To age their balsamics, Acetaia Giuisti uses 600 historic barrels from the 18th and 19th centuries. A white cloth kept in place by a rock topped the openings of each of the neatly aligned barrels, under which lay plates to catch the dark syrupy liquid that trickled out of the barrels. Here, Giusti explained the “Rincalzi e Decanted” process implemented to make Traditional Balsamic Vinegar of Modena DOP.  He showed us a group of eight barrels lined up in a row from smallest to largest like a set of unnested matryoshka dolls. The smallest capacity was 15 liters, each increasing by five. 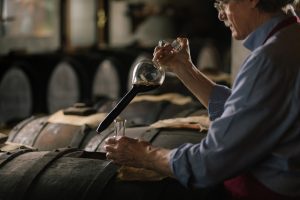 Acetaia Giusti’s barrels are constructed from different woods, each of which brings their own character to the balsamic. The tannic-rich chestnut gives the liquid its classic brown color and cherry sweetens it up. Juniper adds the resinous essence while oak has vanilla characteristics. Mulberry increases the concentration. The older the barrel, the more intense the aromas and traits absorbed by the liquid. The Giusti Riserva collection, produced each year in extremely limited quantities, is extracted from some of the most precious barrels. Needless to say, the balsamic takes on all the different flavors and characteristics of the wood, enhancing the finished product.

After the aging room, we headed to the shop for a balsamic vinegar tasting. We tasted several from the Historical Collection, which is comprised of different recipes and aging techniques developed over the centuries, and one Reserve. Here’s a look.

Then we had lunch in the aging room with that aroma so yeasty, it had me craving sourdough bread. Chef Davide Forghieri of Osteria Emilia cooked a hearty lunch, and we drizzled the Banda Rossa onto every course (including dessert).

Balsamic vinegar can take any recipe up a notch–cocktails not excluded. So, Acetaia Giusti has been incorporating their potion into mixology. Moving forward, Claudio intends to focus on this new component as the acetaia continues to thrive.  Here’s to their future! I can’t wait to see what they do next.