Leonardo da Vinci’s Last Supper is brilliant, but a fresco series that is just as (if not more) brilliant just down the street from Santa Maria delle Grazie is one of Milan’s most venerated art treasures: San Maurizio al Monastero Maggiore.

Now the Last Supper is great and vale la pena for the cost and the regiment that goes into the meager 15-minute time slot to view the painting, but San Maurizio al Monastero Maggiore is free and there’s no time limit.

So, the 16th-century church on Corso Magenta incorporates some of the remains from the ancient Roman era into the building’s edifice (more ruins can be seen next door at the Archaeological Museum) and houses a series of frescos that underwent a major restoration that was completed in 2011. Now, I’m not talking about one frescoed chapel here and another frescoed chapel there and a super fancy dome. San Maurizio al Monastero Maggiore has floor-to-ceiling frescoes in both the both the main church area and the partitioned nun’s hall in the back. Both sides of the partition are frescoed as well.

The majority of the frescoes were painted by Bernardino Luini, a Lombard Renaissance painter who actually worked directly with the late and great Leonardo da Vinci himself. You might have heard of the adjective “Fellini-esqe” to describe a film that recalls the techniques of none other than Federico Fellini? Well in his short story The Venetian, Vladimir Nabokov coined the term “Luini-esque” to describe women with elongated eyes. A perfect example of this lies in the Besozzi Chapel, with a fresco cycle dedicated to St Catherine of Alexandria.  It’s the third on the right in the front part of the church. (St. Catherine is on the left hand side of the picture above.)

You can easily pass an hour here as you go from chapel to chapel and admire the art. It’s astounding. You’ll recognize several biblical scenes like Noah’s Ark, The Garden of Eden and The Adoration of the Magi (painted by Luini’s son Aurelio). The nun’s hall in the back, where the nuns were cloistered, is even larger than the front. There’s also a majestic 16th century organ crated by Gian Giacomo Antegnati; you really have to see it to believe it, but you can read more about it here. 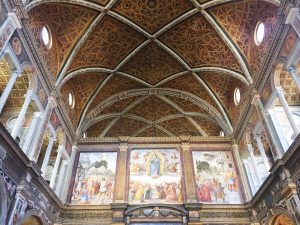 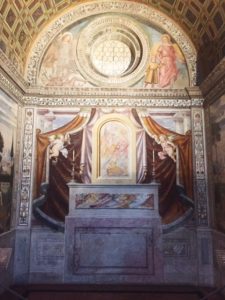