The first time I tried David Chang’s revelatory pork belly bao at Momofuku Ssam Bar was nearly a decade ago. I remember biting into the pillowy, subtly sweet bun filled with that melt-in-your-mouth tender juicy pork belly coated in that simultaneously sweet and salty hoisin sauce, and complete with cucumbers and scallions. They never get old. I try to relish them every time I’m in New York. However, I don’t have to wait until New York every time I need a bao fix.

From Bao House to Mini Maoji to Kung Fu Bao to La Ravioleria di Sarpi’s street food outpost, Bao has a starring role in Milan these days and we locals have plenty of appealing places to pick from. And now with one of my favorite places, MU Dim Sum, thrown into the mix, I’m so thrilled that I don’t know if I can handle it!  I’ve had the pleasure of sampling the encaged smoky gold-dusted black char siu bao filled with caramelized pork, and am simply delighted to see that they have expanded their repertoire to include the following.

They’re all awesome and immensely gratifying.  That perfectly smooth and succulently sweet bao bread meshed dreamingly with the flavorful fillings, and honestly, two are just not enough.   However, there’s more to it than that! The MU Dim Sum team is spreading their love to Torino, having recently opened MU Bao in the Piemonte capital.  MU’s own delivery trucks make the two-hour drive each morning (four hours round trip!) to transport the bao buns directly from MU Dim Sum’s newly installed Bao laboratory where a team prepares the buns in the wee hour of the morning. 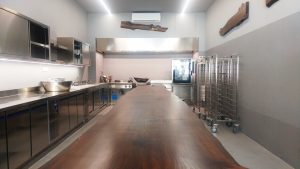 Whether you’re in Milan or Torino, go and treat yourself to some of MU’s iterations of this classic Chinese street food.!

0 replies on “Bao in Milan at MU Dim Sum”