I love Isola. Not only is it home to some of my favorite places (Ratana, Anche, and Berberè), but it boasts some of the most vibrant street art Milano style. As a local, I have passed the murals, stencils and painted electricity boxes countless times; some I have taken note of and even snapped away at, while others I didn’t even give a second thought to. So, when I had the opportunity to take Zestrip’s guided Street Art Milano tour in Isola for further insight into Milan’s street art background, I jumped at it. 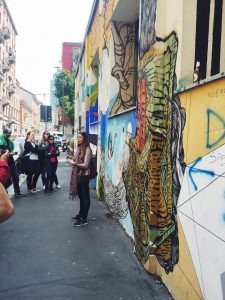 The eye-opening tour highlighted artwork that I had never seen before and got some insight into artwork that I already knew. I would suggest this for a staycationing local like myself or a visitor looking to peel back some of the city’s layers, giving you a newfound appreciation for Milan.

The street art walking tour started on Via Pepe by Porta Garibladi where our awesome guide Veronica (a bona fide street art expert!) explained the difference between graffiti and street art, how the latter eventually found its way over to Milan and the back story on some of the artists. From collaborative morals to discreet stencils to decked out electrical boxes, the tour highlighted the following artists: Mr. Blob; local–and perhaps Italy’s most famous–street artist Bao, Ozmo and his world famous Madonna del Guadalupe; Zibe’s various incarnations of Arnold from Different Strokes; a stencil of Vincenzo Peruggia, the man who stole Mona Lisa; Microbo; Ryan Spring Dooley; and Santi’s balconies, among others.

Fun fact! The Don Gallery, dedicated entirely to the work of street artists, is also in this ‘hood. A street artist known as The Don, Matteo Donini opened the Don Gallery in 2008. After having traveled the world, he wanted a platform to show Italy just how important and relevant street art is.

I’ve included some pics below. I would recommend that you not to just look at these pics and try to guide yourself through the streets by finding them….book the tour instead because you’ll get so much more out if it. I promise you it’s 25 euro well spent! 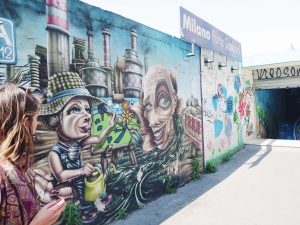 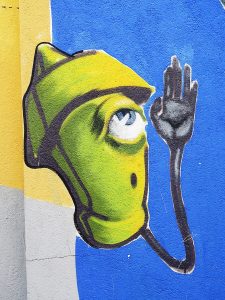 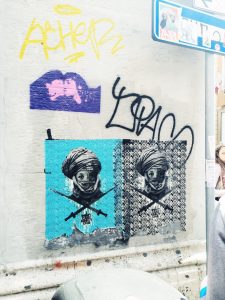 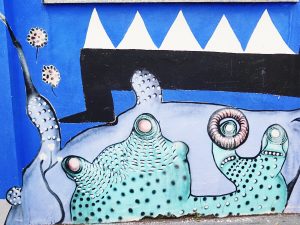