Even though spring has already sprung in Milan–and I don’t want to jinx her early arrival because I don’t want her to go away!!–, I had a craving for that hearty cozy wintry cuisine of Valtellina. So naturally, I headed to Sciatt à Porter, a stone’s throw from Eataly Smeraldo and like two stones throws from Garibaldi, to get my fix.

For the uninitiated, Valtellina is located in the Italian Alps of Northern Lombardy, on the border of Switzerland, and it boasts lots of deliciousness buckwheat based dishes, breseola, dreamy cheeses, and Nebbiolo among many other delights. 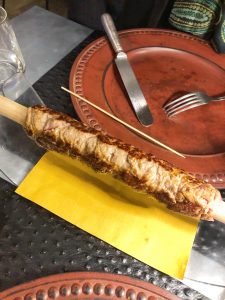 It’s not surprising that Sciatt à Porter’s titular treat is on the menu and an absolute must: buckwheat fritters (kind of like beignets) filled with ooey gooey casera cheese. Eat them hot as soon as they arrive in their handy paper cone container! (Note: you can also drop in for a cone for take away….or, rather, for on the go as they’re best enjoyed hot!)

The tzigoiner, a spiedino of fassona beef, was seasoned and cooked perfectly…it was still nearly raw, yet so incredibly melt-in-your-mouth succulent that it slid right off the skewer when we cut into it.

Also, we shared one of my favorite ski eats, polenta with sausage! The polenta, of course, had cheese cooked into it and had more of a solid texture, which meshed nicely with the moist and flavorful sausage. Sadly, we skipped the pizzocheri this time, but their version of the buckwheat pasta is nicely done and ever so gratifying. There’s always next time!

The wine selection highlights the area and of course has plenty of Nebbiolo DOCG and Sforzati, and we opted for some Ar.Pe.Pe…I can’t remember which one! But this wine producer is worth a shout out as the new younger generation is taking it to new levels and implementing natural production techniques. 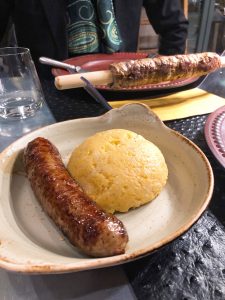 The locale is cute…small (about ten tables?) and contemporary with gray walls and a video screen that shows footage of  Valtellina landscapes.  The ambiance is all around pleasant. Those of you with sensitive noses be warned, the occasional aroma of fried food wafts into the dining room. It doesn’t bother me because fried things make my heart sing!

One reply on “Valtellina vibes at Sciatt à Porter”