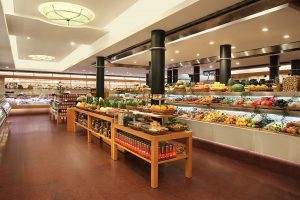 Paris has Fauchon, Milan has Peck. If you’re food-minded, it’s highly unlikely you won’t drop in on Peck during your visit to Milan. This venerated gourmet institution has been around since the late nineteenth century, and while it has changed owners over the years, each proprietor has added an element of greatness to the shop’s legacy rendering it the food pilgrim shrine that it is today.

In 1883, Czech salumi maker Franz Peck opened a German-style salumeria that eventually became the city’s most successful shop of this kind. As his business grew, he began supplying the Italian royal family with his meats. In 1912, Peck moved from Via Orefice 2 to larger premises at Via Spadari 4 where it stands today. Shortly after World War I, Peck sold his shop and the new owner started to offer a wider range of goods, like prepared pastas.

In the subsequent decades, Peck’s reputation soared, and was a private events hot spot as well as the place to see and be seen for politicians, intellectuals and the elite. Like most of Milan, Peck suffere 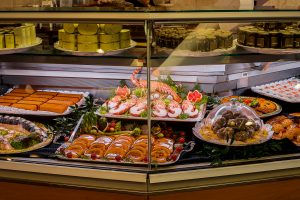 d during World War II but the Grazioli brothers, the owners as of 1956, took Peck in a whole new direction: sandwiches, hot food, etc. In 1970 the Stoppiani brothers came along. Sons of a former grocer, these new proprietors expanded the offerings even further: cheese, meats, deli counter, baked goods and a wine shop as well as a salon de té  on the first floor. In 2013, entrepreneur Pietro Marzotto acquired the shop, and continued to grow the brand, converting the salon de té into a proper restaurant.

As it has evolved over the years, there is one constant: Peck has always held a special place in the heart of the Milanese people. Some of its dishes are so Milan like the nervetti (veal knee cartilage salad with olive oil, vinegar and onions), Russian salad (not the most Milanese of monikers I know, but a bona fide Peck classic), glistening gelatin-coated chicken and foie gras, and the famous pâté, which pretty much has a dedicated slot on any Milanese Christmas table, among others.

Aside from the wine (though Peck does have its own Franciacorta), most of Peck’s goods are self-branded: olive oils, teas, jams, pasta, etc., are all out bedecked with Peck’s unmistakeable sun adorned with squiggly rays.  If you want to impress a dinner host, you bring them one of Peck’s comestibles.

You can spend anywhere from 10 minutes to an hour here, depending on how much time you have and what you want to take in. They have more all cheeses from Parmigiano-Reggiano to burrata to gorgonzola to scamorza to international varieties. The butcher area is particularly impressive and don’t miss the multitude of veal cuts, a La Cucina Milanese fundamental.

The impressive wine cellar boasts some bottles bearing Peck’s own labels as well as a vast selection of some of the finest Italian and international wines. The bottles are highly marked up, but it’s worth taking a peek down there.

“You have to change to stay the same,” the artist Willem de Kooning used to say, and over the last century, it seems that all of Peck’s owners kept this mantra front of mind. In October, Piccolo Peck opened, a cafe area inside the shop that’s modeled on a Viennese Cafe but with Peck’s typical flair. It’s the kind of place you can sit undisturbed for a few hours, read the newspaper, sip your coffee or tea/have a bite, and just unwind. As Peck continues to evolve, I’m excited to see what they come up with next.