So, I totally got what all the Sicily fuss was about during the Fuoco Food Festival.  I hadn’t even been back in Milan for 12 hours when I booked a flight to Palermo because it was high time I got to see the storied city myself.

Extraordinarily resilient, Palermo had been bombed during the war and was even the epicenter of Mafia violence. However, she stands strong, proud and radiant today. In several ways, Palermo reminded of Rome. I think it was the sounds of the of those venturesome motorbikers speeding along a little more wildly than the Milanesi…perhaps it’s a Southern Italy thing?
However, the faint aroma of the sea wafting through the streets was evidence that I wasn’t in my former adopted city.

Thanks to my friend Salvatore, I ate incredibly well in Palermo. Too well.  Here’s a glimpse at some of the deliciousness:

Probably one of the most glorious bites I’ve ever had the privilege of tasting. So simple, yet so gratifying: chickpea fritters on a sesame seed roll. You can also get this with crocche, potato croquettes, which you can see in the background on the plate. I like them either way! On their own or with the sandwich. This street food mecca has plenty of other fritters and typical Palermo street food to satisfy all food pilgrims. This place is most famous for the pane ca meusa, a sesame seed roll stuffed with veal spleen, lung, trachea and cartilage. I consider myself an adventurous eater, however, I stuck with the potatoes and chickpeas. Facebook.

Love, love, love everything about this place! Quality Sicilian ingredients are served American style, but the food is Sicilian at the core. The cutest part is that the menu items are spelled phonetically according to Italian pronunciation. FUD is clever and delicious, plus it boasts a stellar selection of natural wines and craft beers. Website.

Salvatore brought me here for my first dinner…it was after 10pm and I was so hungry! This super cute joint specializes in Pugliese and Greek cuisine, so the food is Mediterranean at its core. However, the offerings differ slightly than what’s on the menu at most of Palermo’s other restaurants. I had a dreamy spaghettone with olives and tomatoes that just ever so gratifyingly hit the spot… the perfect welcome to Palermo. Facebook. 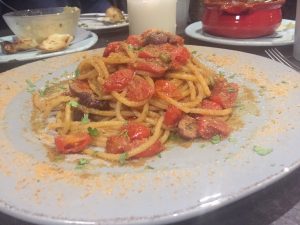 We didn’t have a reservation but decided to try. Sure enough, they were able to accommodate us and we enjoyed the loveliest lunch–even though one of the most misbehaved children I have ever seen in my life sat at the table next to us! Corona Trattoria is 87 million percent everything! Orazio and Rosetta Corona along with their son Giuseppe run the show at their restaurant, a true labor of love.  The simple yet flavorful typical Palermitano dishes are coupled with a solid wine selection that features some of my favorite Sicilian bottles like the Vignamare and the Pomice. Rosetta’s very own teste di mori, ceramic vases shaped like Moor’s heads, adorn the tables and are also available for purchase.  Website.

There are a few outposts of this place in Milan, but Salvatore suggested I visit the original because it’s historic and much better than the other locations. We ate a whole bunch of fried goods from arancini to croquettes to panelle and everything in between.  I also sampled my first cannolo palermitano here. Website.

Yes, Sicily is known for its historic open-air markets, but the indoor Mercato San Lorenzo, a food hall and market. is quite nifty, too…especially if it stars to rain! Having opened in 2016, Mercato San Lorenzo is a place to shop for ingredients as well as to sit down and eat. We noshed on some fried things. I sipped a Sicilian orange soda, but wine and beer were on offer as well. Website.

I can’t even keep track of all all the sweet bites I sampled, but here’s a look at some of them. Salvatore led the way through the sweet shops and even included a suggestion from my friend Gina: Pasticceria Cappello.

0 replies on “What I ate in Palermo”