Save for an art history course I took during my semester abroad in London (a class that I loved), my art “education” has been autodidactic, so I’m not really one to critique art. I can say if I like something or not and why, and here are my thoughts on the Klimt Experience at MUDEC in Milano. 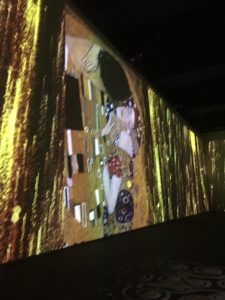 Despite having traveled to Vienna during my said semester abroad, I didn’t “discover” Klimt until 2014 when I watched a documentary about the Nazi purging called The Rape of Europa.  Based on a book of the same name (which I had immediately downloaded and still have yet to read), one of the storylines followed Maria Altmann*, a Jewish refuge who fled Vienna during World War II, and later fought a long and admirable legal battle to reclaim five Klimt paintings that belonged to her family. Her aunt, Adele Bloch-Bauer, was the subject of two of Klimt’s most famous paintings Portrait of Adele Bloch-Bauer I (arguably his most famous and on display at NYC’s Neue Galerie) and Portrait of Adele Bloch-Bauer II, on display at MoMa. 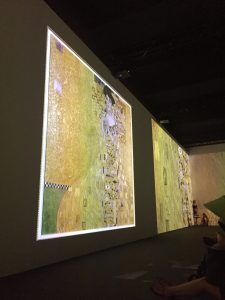 Anyhoo, the documentary made me obsessed with Klimt, an Austrian symbolism painter from the late 19th/early 20th century. So much, that I just want to go back to Vienna not only re-see a city a saw more than a decade ago, but to for Klimt.  I just love all the gold in his paintings and am struck by his whimsical, erotic approach to his art. And again, that gold is just so stunning I even bought a Klimt tarot deck to further feed my newfound tarot cards obsession.  So, when I heard there was going to be a Klimt exhibition. Milan called the Klimt Experience with the Adele Bloch-Bauer portrait in the ads, I was so excited. All I knew is that it was a multi-media exhibit showcasing approximately 700 photos of his work and inspirations. It opened on Wednesday, and I was so excited that I made plans to go this past weekend with two friends. Some buzz words describing the exhibit included immersive, 3D and interactive. However, I wouldn’t use any of those words to describe it. 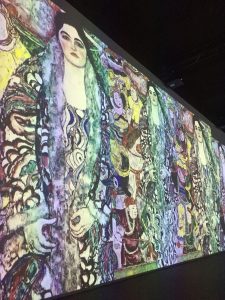 The Klimt Experience is more like a feature length 90-minute  movie showcasing some of the artist’s most famous works as well as his contemporary influences him like architecture and fashion. The images flowed to a classical soundtrack (which I enjoyed very much) that included Mozart’s Eine Kleine Nachtmusik, Beethoven’s Symphony no 5, Wagner’s Ride of the Valkyries, Orff’s Carmina Burana and more from these composers as well as pieces by Strauss, Lehár, Bach, and Webern. (I’m no classical music expert so if I’’m wrong about some of the tunes, leave me a comment and I’ll correct them ASAP!) However, I hate  to say it, but I ultimately found the the Klimt Experience as a whole to be rather disappointing and anti-climactic. 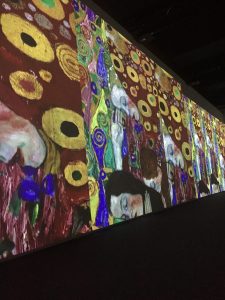 Now the multi-media show was executed beautifully, however the entire screening took place in one room with not enough seating, so we (and several others) sat on the floor the entire time. No cushions, padding or anything to enhance comfort. To sit in one place for that long, was a little much. (I have chalked it up as an exercise in patience.) Now, thankfully, this past weekend marked the start of the Milanese vacanza Exodus, so the exhibit wasn’t terribly crowded, but if the Klimt Experience winds up being a hit and fills up on the weekends in the post-summer months, I don’t know what they’re going to do about seating.

Why was I disappointed? I guess I was expecting something bigger and grander, and even a little more autonomous where you walk from one multi-media exhibit to another. And also, it would have been nice to have (at least) one Klimt painting on display at the end. I’m not trying to diminish the work of the multi-media artists because they put together a beautiful show, but really? That was it? I left wanting to see and do more (and slightly sore from all the fidgeting and shifting I did to feel comfortable on the floor). 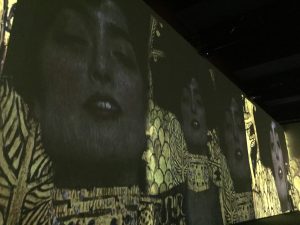 As my friend said when we were laving, put the 15 euro towards a flight to Vienna. If I’m paying that much money, I want to see at least one real artwork.  If you do want to check out yourself, you can purchase tickets in advance here. Otherwise, you can show up and buy tickets day-of.

Klimt Experience at MUDEC; Via Tortona 56; Through 7 January, 2018 website

*Note: Maria Altmann is portrayed by Helen Mirren in the film The Gold Woman, a biopic of sorts about her fight for her family’s paintings.