One perk of living in Milan is the city’s delightfully close proximity to Piedmont, arguably Italy’s finest region for all things food and wine. Biella, about a 90-minute drive from Milan, sits in the foothills of the Alps, equidistant from both the Lombard capital and Turin. The perfect day trip for gastronomically curious travelers, Biella is known for a particularly pleasant, yet relatively unsung, Italian treat: canestrelli biellesi.

Anyone who knows me knows that I’m a cookie monster. Since moving to Italy, I’ve become acquainted with various biscottini.  ‘Italians do it better’ affirms the seemingly antediluvian adage, which is why I’m always surprised by how surprised out-of-towners are when I bring them around to taste firsthand just how delectably Italians do cookies.  Canestrelli, cookies typical of Liguria and Southern Piedmont, make my heart sing: lemony flower-shaped butter cookies with a circle cut into their centers and topped with an opaque blanket of powdered sugar–Pasticceria Marchesi‘s happen to be one of my innocent pleasures.

So, when I day-tripped to Birrificio Menabrea in Biella, I was initially a little confused by all the canestrelli chatter. I wasn’t in Liguria or southern Piedmont, we were north–very north, near the Alps–so I just shrugged off our location as close enough and didn’t really give it another thought.  Little did I know that I was in for a confectionary enlightenment: canestrelli biellesi, which couldn’t have been more different than the canestrelli that I knew and loved.

For more than two centuries,  pasticceri biellesi have been baking these crispy chocolate-hazelnut-fondant-filled wafers.  The baker at Caffè del Teatro Black & White’s laboratory demonstrated the method for us, building the cookies by hand one layer at a time. He set down a large chocolate wafer sheet on his workstation then coated it with a luscious layer of chocolate-hazelnut fondant, then placed a wafer on top to form a giant block that resembled a sheet cake.  He then flattened the soon-to-be cookies with a hefty granite slab before baking. After emerging from the oven, a special device sliced the block into the narrow rectangular cookies. To guarantee authenticity, “Canestrelli Biella” is usually etched into the top layer along with the name of the pastry shop. Texturewise, they’re sort of like an elevated KitKat,  the wafer adds a crisp crunchiness to the chewy fondant. However, the flavor is much more nuanced, juxtaposing the deeply rich chocolate with sweet toasty hazelnuts to result in a pure,  yet subtle decadence. Caffè del Teatro Black & White delivers, so check ’em out online.

They also made nutritivi, simple (but highly addictive!) cookies made only from eggs, flour and sugar. These dainty treats, also typical of Biella, emerged after World War II–Italians were trying to rebuild the country so fancy ingredients were not only pricey but scarce. So, locals had to make do with what they had at their disposal.  Nutritivi are sold online, too.

Not to sound like a snob, but I can’t help but ponder about how my taste has evolved since moving here. Once upon a time, I loved Nutella, but now that I have all these finer chocolate-hazelnut amalgamations at my disposal, I can’t help but turn my nose up at my mass-produced former love because I find it too cloying and less complex. Sigh. 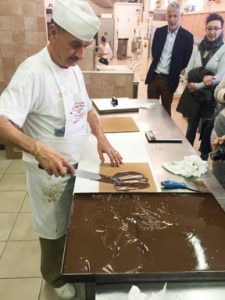 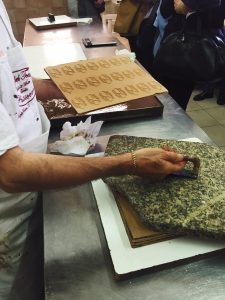 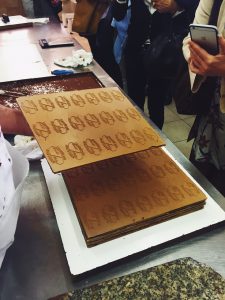