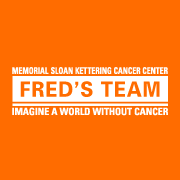 “In running, it doesn’t matter whether you come in first, in the middle of the pack, or last. You can say, ‘I have finished.’ There is a lot of satisfaction in that.”  – Fred Lebow

Here in Milan, I’ve been training for the New York City marathon taking place on November 2, but I need a little help. I’m running with the charity Fred’s Team for which I have to raise $3,500 for the Aubrey Fund for Pediatric Cancer Research, a division of Memorial Sloan-Kettering Cancer Center.  I have ran with Fred’s Team during my two previous NYC Marathon stints; the charity holds a special place in my heart and I’m writing to ask if you’d be kind enough to please make a donation through my fundraising page. No amount is too small–or too large! ;). All types of cancer are just terrible and it never ceases to baffle me that in 2014, there’s still no cure for this wretched disease. And it’s not for lack of trying. There have certainly been a multitude of advancements in cancer research thanks to the hard work of doctors and scientists, but cancer itself is just a vicious, stubborn disease that refuses to go down without swinging. It won’t prevail. Of that I’m certain. And it’s both humbling  and rewarding to believe that I will hopefully have played some kind of small role in its defeat.

Fred’s Team is named for legendary runner Fred Lebow, one of the founders of the NYC marathon….some of you might already be familiar with him. He was  beyond extraordinary and you can read more about him here. He was diagnosed with brain cancer in 1990 for which he underwent treatment at Memorial Sloan-Kettering. During his time there,  he jogged through the hospital halls for exercise and he would pass the other cancer patients, which made him determined to raise money for a cure. He ran the 1992 marathon in remission, and for the race, he and a group of runners raised $1 million to fund research at Memorial Sloan-Kettering. This was the first charity of sorts to be associated with the marathon.  Sadly, in 1994 he lost his battle with cancer and passed away just four weeks before that year’s marathon.  They held a memorial service for him at the finish line which at the time was the largest memorial gathering in Central Park since that of John Lennon.  Fred’s Team was officially established the following year.  Lebow served as President of the New York Road Runners organization and Race Director for the NYC Marathon from 1972 until his death. There’s so much about this man that I admire on so many different levels….he’s truly inspiring.  I could wax poetic about him for an eternity and a half, but this post would never end! But I encourage you to click on one of the above links or Google him!

Anyhoo, Fred’s Team supports more than 50 areas of research at Memorial Sloan-Kettering. The particular fund that I chose, The Aubrey Fund for Pediatric Cancer Research, is named for Aubrey Barr, who as a young girl received experimental treatment for acute lymphoblastic leukemia at MSK. She was pronounced cancer-free at a time when the survival rate for the disease was just one in ten. During college, she started running and when training for the 1992 NYC Marathon, she received a letter from Fred Lebow encouraging runners to collect sponsor donations to benefit cancer research at Memorial-Sloan Kettering , and she followed suit.  In 1997, the fund was established in her name and she has since run 27 marathons with Fred’s Team, having raised more than $500,000 for cancer research.  Pretty awesome, no?

Well that’s the good word for today. Thank you in advance for your attention, kindness and generosity. Once again, here’s the link to my fundraising page.