Kind of like Venice, there is nothing that can prepare you for seeing the Alhambra in person. Pictures and videos just don’t do this fabled landmark justice…and that’s saying something. I live in a perpetual state of farsickness–and the Alhambra never failed to elevate my farsickness to new heights everytime it showed up in my Instagram feed.

I believe there’s a massive difference between travelers and tourists, and I don’t consider myself the latter. When I’m on the road, I prefer to do my own thing rather than be hoarded along fellow headset wearers.  However, there are times when I think a tour is necessary, and there are plenty of ways to take one as a traveler and not as a tourist. Case in point: Musement’s tour of the Alhambra and Generalife Gardens.

The Alhambra is a bucket list trip! A once-in-a-lifetime occasion for many, so it’s only right to go big or go home. Therefore, a tour is a must. While strolling the grounds is impressive in and of itself,  a knowledgeable tour guide just makes it better. So, with that being said, here’s a look at what I learned on this incredible tour of the Alhambra. 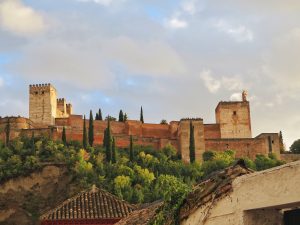 So, here’s a little backstory: The Moors ruled Spain from 711 to 1492. The Alhambra started as a small fortress in 889 and in 1232, Mohammed I–the first Nasrid Sultan–had commissioned the palace shortly after coming to power, building the palaces into the majestic walled hilltop complex complete with a medina in which people resided.

Alhambra means “the red one”, but back in the day, “red” referred to the terroir around the castle as the castle was whitewashed…just like the Albaicin neighborhood, which, back then, ironically, was red.

Needless to say, the Alhambra’s location was incredibly strategic. Being nestled high into the foothills of the Sierra Nevada mountains not only offered protection but also let the inhabitants see any approaching enemies. In addition, there were mountain streams from melting snow on the mountaintops that were used for irrigation.

The Sultans had to watch their backs

In just 255 years, 23 Sultans ruled. Tensions ran high inside these fortress walls. See, the Sultan had four wives and he had to pick his favorite son as his heir—the title wasn’t automatically passed on to the firstborn son. Needless to say, this caused a lot of jealousy!

So, eventually, the Nasrids were at civil war and the Catholic monarchy sort of played both sides to keep them fighting each other so they could focus on taking back Spain. Then came 1491, when Granada was the last remaining emirate. Muhammad XII/Boabdil, the last Nasrid Sultan, surrendered to Ferdinand and Isabella without a fight on 2 January 1492. He was greatly outnumbered and it would have been a losing battle.

After departing, he looked back at what he was leaving behind and let out a deep sigh to express his sadness. His mother Aixa, who was apparently one tough cookie famously said: “Don’t cry like a woman for what you couldn’t protect as a man.” (Does that not sound like something Cersei Lannister would say? ) I know this can be perceived as sexist, so please don’t troll me for…I’m just recounting a bit of history! Salman Rushdie even referenced this as the title for “The Moor’s Sigh.”

Where did he go? He was apparently offered a lordship and home in the mountains but instead opted for a financial settlement to leave the country. 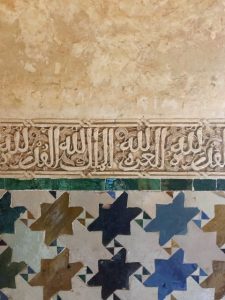 This UNESCO World Heritage site is considered one of the finest exemplifications of Moorish architecture, complete with all the signature characteristics like those incredible honeycomb ceilings, distinct horseshoe arches, mesmerizing geometric shapes, delicate Arabic calligraphy, intricate latticework and more. Of particular note are the Harem windows covered with wood latticework to keep the women from being seen. Back then, the harem was simply where they lived and didn’t have the Caligula connotations it has today.

Wood, plaster and marble comprise the adornments.  However, it’s not so much the materials that wow…it’s the way they were worked. At the Alhambra, they ask you–and rightfully so–not to touch anything. Instead, select pieces are on display so that visitors can touch to–literally–get a feel, for the materials and craftsmanship.

Our tour began at Generalife, the summer palace, and its fabled gardens before moving on to the Alhambra. Back in the day, a bridge did not connect Generalife and the Alhambra. For security purposes, you had to travel up and down on horseback to get from one palace to the other, and the division between the palaces acted as a natural moat of sorts.

This summer palace had gardens that today showcase fine botanical landscaping. Back then, however, the garden’s main purpose was to feed people so, needless to say, the landscapes looked completely different. Back then, sole gardener tended to all the products, yet he was still so underpaid that he would have to take goods from the garden and sell them on the side for cash. The new gardens were planted in the 1930s. 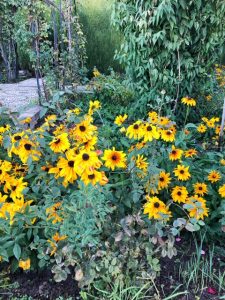 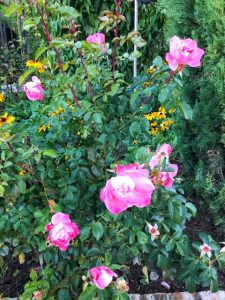 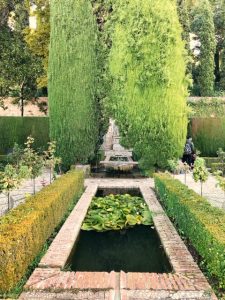 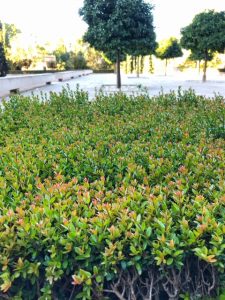 In the days of the sultans, one of the most important herbs was myrtle, and there’s still lots of it to be found in the Alhambra today. This all-purpose herb was used for flavoring food,  in perfumes and also as an insect repellant. Roses, which also still flourish today, were popular for rose water.

Orange trees abound, but these are not the kind of oranges we like to snack on. The garden’s bitter oranges are often used for marmalade. The everyday oranges that we know and love didn’t actually arrive until the 16th-century via Portugal.

Of particular note in the Generalife palace courtyard is the Cypress tree in the fittingly named Court of the Sultana, as it was here where the Sultan’s wife was said to have had her secret meet-ups a knight of the noble Abencerrajes family. More to come on this later… 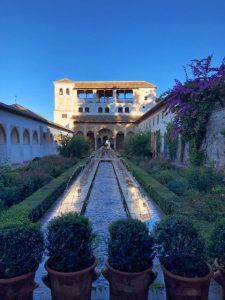 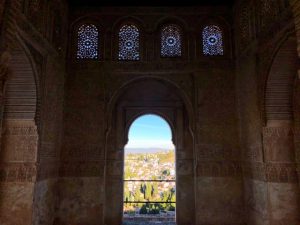 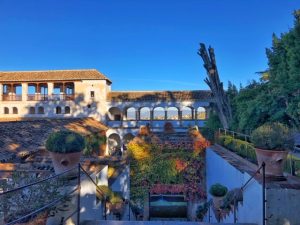 When the Catholics took over, they tried to wipe clean a lot of the Islamic influences, and they assigned the work to the Moriscos–the Muslims forced to convert to Catholicism.

There were two types of Arabic calligraphy used; one in cursive quoting Quranic verses and the other in which the characters represented sentences instead of letters, called Kufic. When the Catholics started taking Spain back from the Moors, they didn’t set out to preserve, so they tossed most of the Arabic, but left the Kufic because they thought it was just decorative. As a result, several mosques-turned-churches around Spain still have the original Kufic.

The Hall of the Ambassadors

I really have no words. Simply majestic down to the wood honeycomb ceiling which depicts seven layers of stars to represent the seven heavens. Here, the Sultan met important people. It’s said he surrendered the Granada to Ferdinand and Isabella in this room, and then subsequently where the monarchs met with Christopher Colombus. Just read about it here.

Firstly, I have a thing for lions so I really dug this courtyard, and it would have made the perfect backdrop for something House Lannister. The fountain in the center has 12 different lions jetting water out of their mouths, all are completely different. While the reason isn’t confirmed, it’s said they represent the 12 tribes of Israel as this was a gift from the Jewish population.

It recalls a Christian cloister, which isn’t surprising as both Catholics and Muslims worked on it together when Catholic Castilia and Muslim Grenada were allies. Together, they built this court with Christian influences in a Muslim palace and in Seville, they constructed a Christian palace with Muslim influences: the Alcazar–for GOT Fans, the Alcazar is the location of the Water Gardens of Dorne.

In the side rooms, a major restoration of 14th-century ceiling murals was just completed.

So, back to the Sultan’s wife. Some say it was Boabdil, others say it was his father, some say they don’t know for sure which Sultan it was. Regardless which Sultan, history says that after learning about his wife and the knight of the Abencerrajess, the Sultan invited the 37 Abencerrajes knights to a private event in what today is called Sala de los Abencerrajes. Once everyone was in the room and the party was underway, the Sultan–in full Red Wedding style–had the doors shut and ordered his men to behead them all. In fact, a rust stain in the fountain is said to be the blood from the slaughtered knights. When you’re in here, don’t forget to look up! The ceiling is spectacular resembling a honeycomb and stalactite, both of which are traits of Islamic architecture. Our guide advised us to put our cameras on selfie mode and hold them over the fountain to capture the ceiling…a ceilfie.

After passing the Washington Irving Room (where he wrote the Tales of the Alhambra),  a ton of people will be on the bridge walkway snapping pictures of the incredible view of the Albaicín. Walk past them and go down one flight of stairs. There’s a terrace directly below that is less crowded!

The Alhambra’s original Winter Palace was destroyed by Charles I to build a new European Renaissance structure, but it never came to fruition. He did, however, also commission a palace designed by Pedro Machuca, a student of Michelangelo. Today the ground floor of this palazzo resembling Florence’s Pitti Palace is home to the Alhambra Museum, and entry is free.

To start, just take a taxi! Don’t try to walk up. You’re going to be doing lots of walking once you’re up there, so treat yourself to a taxi. The rate is just between 5 to 6 euro from the city center. When you’re done, walk down.

Here’s what was awesome about the tour: it starts at 8.30am. You have your tickets and don’t have to wait on the line with the other people who are waiting to get in (they start early…kind of like Shakespeare in the Park!). They’re waiting for the palace so once the doors open, there’s a massive influx. Musement’s tour begins with Generalife and then enters the palace at 10am, so there’s time for the crowds to stagger.