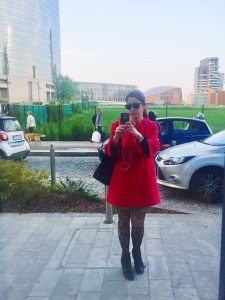 Jaclyn DeGiorgio is a Milan-based storyteller, traveler, eater and beach bum who suffers from a chronic case of farsickness and an insatiable sweet tooth. She loves red lipstick, Paris, London, and carbs, and has an aversion to French manicures, licorice, mayonnaise and rainy days.

“Milan, why would I ever want to live there?”

That’s how I (rather ignorantly) once responded to a friend who once suggested I move to Milan. Then I followed it up with, “There’s nothing there but the Duomo and 1970s architecture. And it’s all gray. The city’s best selling point is risotto alla Milanese.”

Now, I wasn’t speaking from firsthand experience, I was simply regurgitating (obviously un-vetted) feedback from friends who had traveled there. A little more than a year later, I visited Milan for the first time and boy did I eat my words…both literally (the food scene was insane) and figuratively (I wanted to live here!).

I moved to Rome one year later and to Milan one year after that. Getting to know Milan wasn’t easy. It’s not as in your face as, say, Rome’s ruins or Venice’s canals;  Milan is hidden, so you really have to peel back the layers in order to open the city’s ubiquitous imposing closed doors. If you give Milan a chance, I swear you’ll love my adopted city as much as I do.

Pre-Italy, I spent nearly a decade on New York City’s restaurant and hospitality scene, doing everything from waiting tables to public relations to special events. Here in Italy, I have worked as a contributor to Kitchen Aid’s Serious About Food blog and was the food and travel editor at Dolce & Gabbana’s now dearly departed e-zine Swide. I’m currently the editorial content manager at Musement, and I have written for The Financial Times, Conde Nast Traveler, Food Republic, Fathom, 1820 Magazine and Liquor.com.

I’ve been blogging since I moved to Italy in 2013; my first blog was called Romesick and Loving It, and A Signorina in Milan was born a few years later.

Thank you so much for reading! If you feel like saying ciao, drop me a line: jaclyn (at) asignorinainmilan.com. I’ll respond…I promise!